For two days a week I work as Business Development Manager for Buxton Civic Association. It is a fascinating, challenging and at times frustrating job but I love the variety. BCA owns some 200 acres of woodland in and around Buxton. The woods were given to the Association in the 70’s and 80’s by the Devonshire Estate. Beware Dukes bearing gifts as our Chair Dr Mike Monaghan jokes, but because they are 200 year old plantations mostly planted to hide the scars of the lime burning extraction industry they pose an interesting and often expensive set of challenges.

The trees are mainly Beech and Sycamore and in terms of offering a habitat for wildlife it is limited. There is little ground cover and light struggles to make an impact in much of the wood. But having achieved SSSI status in its biggest wood Grin Wood, for the open glades and the wild flowers that grow on the remains of the kilns, the limestone rich soil being very important for them, BCA has decided to embark on a project to further increase the habitat diversity in the wood.

The first part of this has involved the creation of a woodland ride at the top part of the wood, linking several of the glades. To my inexperienced and layman’s eyes the results have been spectacular.

Taking out some fifty trees along a 300 metre stretch immediately brought an increase in small birds, taking advantage of the brashings and debris left in situ. But something else happened to. By opening up the ground, the number of rabbits increased and this in turn has attracted buzzards to come into the ride and hunt. I have been walking the woods on and off for twenty five years and until recently I had only seen buzzards a couple of times. Now I see them almost every time I go up to the ride, often soaring above but more and more often perched in the trees or sitting on one of the stumps surveying what is on offer.

Of course a project of this kind will have its detractors. There are those that argue that we should not fell trees. There are some who see the felled trees, brashings and the fallen branches as untidy, missing the point of course that nature is not neat and tidy and dead wood is vital and essential for the health of any wood. 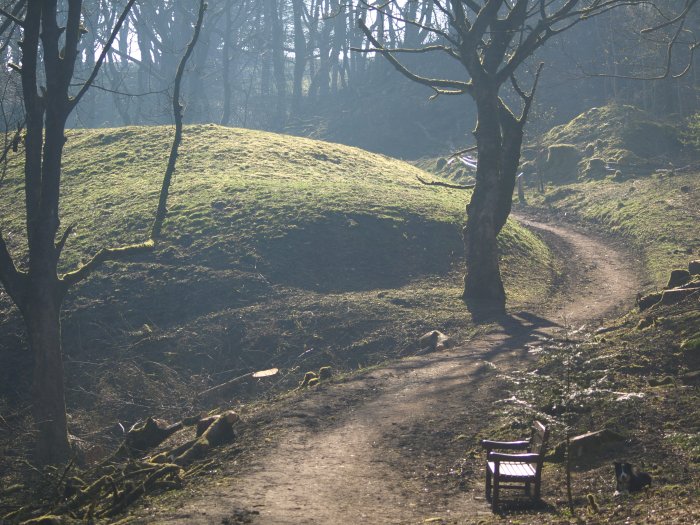 Part of the Ride just after the felling

But on the whole most have been encouraging and encouraged, able to see the potential and what could be, as more native species return and the variety of plant height encourage invertebrates providing food for more birds and mammals.

It is encouraging so far, but there is a long way to go. But who knows perhaps in five years’ time as well as buzzards there may be Goshawks hunting in the woods.