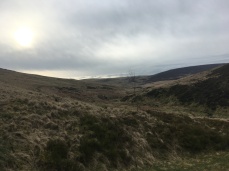 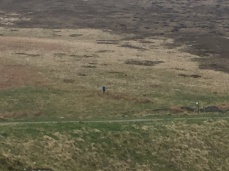 I took the dogs to the Goyt this morning. We set off a little later than I planned, but when I got to Goyts Lane car park it was fairly quiet. The walk was risky given that Gabby is still very reactive but with the change in her lead recently, I find that I can manage her as long as the other owners keep their dogs under control.

We set off along the railway track (disused) The signs advising people to keep their dogs on a short lead are up. This is to protect the ground-nesting birds.  During the course of the walk, we encountered six other dog walkers. Four were running free, under no sort of control what so ever, one was a collie that was sticking to the heels of his owner like glue, the other was a white labrador that was on a short lead. (Of course, both the Gabster and Lilly were on short leads too)

We were greeted by two Curlew flying in that beautifully elegant way that they do, calling and then gliding down to their potential nesting site. It saddens and annoys me to think that these beautiful birds will fail to breed here yet again, not because of the foxes and badgers that get the blame so often but because people are either too stupid or arrogant to take heed of some sensible advice.

In the past I have spent my walks asking people to put their dogs on leads, patiently explaining why. Most people will listen politely then ignore you, some name call you telling you to mind your own business. I guess that they will be the same people that find the sheep wrecked, and grouse moor ravaged landscape beautiful.

Anyway, the dogs enjoyed the walk. We got back to the car just as the rain started to fall. Now as I write this, they are both sleeping nearby and I can if I listen carefully, hear the gentle sound of contented dogs snoring.