Most of the snow has gone but its still cold so I wore my thermal underwear (okay to much information) as I was intending to spend a couple of hours lying up in one of my favourite spots to watch and wait. When I got to the carpark there was a lot of activity. The curlews that nest on the higher part of the moor were unsettled. I think it was a party of walkers plus dogs (off the leads). The walkers were noisy and did not seem to worry where their dogs went. Luckily they were at the end of their walk.

I got to my spot and had not been there long before the Owl appeared. Because I was high on the side of the valley I watched as it flew up the side of the hill and then realised that there were two. I watched for the next ten minutes as they flew together, tumbling and gliding and quartering the hillside. Not a lot of serious hunting appeared to be done and they displayed to each other, dropping through the air making a clapping sound with their wings. It was, for me a mind blowing few minutes. They flew quite close, oblivious to my presence or unconcerned by it, they were true masters of the sky the hillside and the valley and I was so lucky to have stumbled across them. 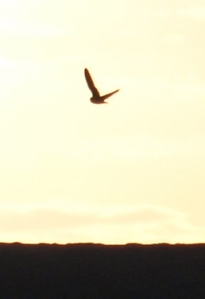 I have take plenty of photos but my lack of skill means that few of them are usable. I will sift through them amd see if I can find one with them both on.

The light was quite extraordinary as the sun set. 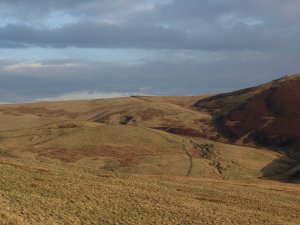 As I walked back to the car the air was full of sky larks and I turned for one last glimpse of the setting sun and the valley, before heading for home. 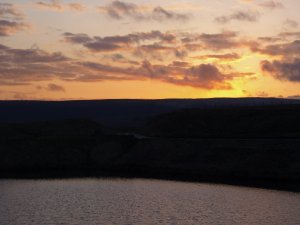 I watched from the car park as two cyclists ignored the signs and set off down the steep narrow muddy path to the bottom of the valley. Hopefully they will break their bikes on the rocks and have to carry them back up the hill.