It is the middle of June but summer is on hold, a cold is wind blowing through the valley, and there is more than a hint of rain in the air. The wooden bench that overlooks Wildmoorstone in the Goyt valley is occupied by an elderly couple, waterproofs pulled tight about them, hoods up and hands, seeking warmth, are clutching mugs of tea. Thinking it would be rude not to, I stop by the bench and start chatting. Lilly the Collie stays aloof stretching her lead as far as she can and giving me her disapproving stare. I ignore her. The couple are on their holidays, they tell me. They used to live locally and have always loved this part of the Peak District, and now try and come back at least once a year. ‘It’s such a beautiful spot. So peaceful and quiet, we just love it’. Her husband smiles as she speaks and nods his agreement. 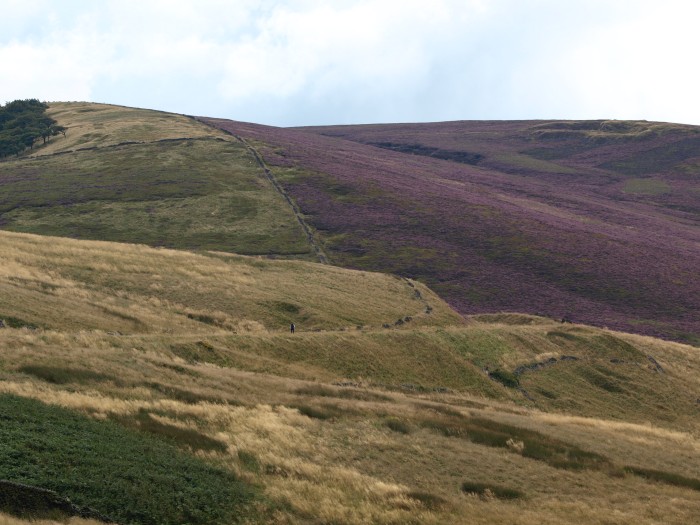 The view from the bench hardly changes throughout the year. Apart from a brief period in August when the heather tips turn purple. This is a cut and burn landscape, created deliberately to favour the red grouse, so that they can breed in sufficient numbers to provide decent ‘sport’ for the few that have the inclination and the money to shoot them.

I find it a dismal, depressing landscape. A wet desert, as George Monbiot has described the sheep wrecked moors of the Cambrian Mountains. The few trees that have been permitted to take hold, cling to the gullies forlornly and without hope.

This is the view that one can see for much of the Peak District, our first National Park. Endless grouse moor or bare sheep wrecked hillsides, with the occasional scattering of commercial forests, so densely planted that nothing can grow on the ground where the sun don’t shine.

Yet it’s not just the old couple clutching their tea on a bench in the Goyt that see this as an area of outstanding natural beauty. It is the most visited National Park in the country, getting half as many visitors again as the Lake District, and all the brochures and advertising describe it as beautiful, stunning, wild and remote.

So how has this happened?

Firstly of course the landscapes are almost entirely manmade. They are working hill farms or they are managed for shooting. Yet the landscapes are considered unique and the landowners praised for their conservation efforts, preserving this wretched landscape and often being paid to do so.

The conservationists go along with this, supporting the preservation of ‘now’ scapes.  Grouse moor owners claim the credit for increases in curlew or lapwing numbers, species selected because they do not compete with the grouse for the moorland resources and pose no threat to the shooting.

Is this the extent of our ambition? To conserve an artificial landscape, and allow shooting interests to dictate what species will be allowed to prosper and tacitly turn a blind eye to the persecution of the birds of prey such as the Hen Harrier and the Peregrine falcon. Two species that should be viable in the Dark Peak but are notable by the absence.

And there is the silence.

Even the curlew seem to have deserted Wildmoorstone this summer. Maybe they have occupied the lower slopes and the farming land but it has been rare to hear their mournful cry.

A walk on the grouse moor is to see and hear little apart from the red grouse. Occasionally a raven or two will fly across the valley, and the sound of the planes heading into Manchester airport. They banned sheep from the moor to try and encourage the heather to spread, with the intention of increasing the size of the grouse moor, but it proved in effective and now the sheep are returning to further wreck the landscape.

Does anyone care? If lots of people are quite happy with what they see, oblivious to what is really happening, or even indifferent, should we really be bothered that much of our National Parks are maintained for the benefit of maybe 1,000 wealthy individuals?

I believe that we should and further more if people were aware of the landscapes that they are being denied by a small selfish minority they would be angry. I am not saying that there should be no land for grouse moors or any sheep farms but we need to make space for an alternative.

George Monbiot has written of the possibilities in his book Feral. This is not to advocate that we go back to a landscape that existed before man found and began to exploit the habitats in these islands but that we allow a landscape to develop, that is not managed for commercial interests, where predators are allowed to return to shape and develop the ecosystems.  A landscape of native trees and open glades, where wild boar and perhaps one day Lynx could roam. See then how nature re wilds the landscape; imagine the thrill of walking in a genuine wild place, think of the benefits for wellbeing, education and yes even perhaps Tourism. The benefits would be for the many, and there would of course be detractors at every stage of the process but it is a dream worth pursuing, even if it would be many years before it came to fruition.

So why not set a target to re-wild 25% of our National Parks and to target the return of apex predators such as Lynx and in Scotland Wolves.  It would shift the role of National Parks from the glorified planning authorities that they are, to having a worthwhile role to play as a dynamic part of a vibrant conservation movement. It would give the next generation a landscape to be truly inspired by something that they could thank us for as opposed to the legacy of debt and environmental misuse that they will inherit unless we change.

Have a look at Rewilding Britain the new website for the rewilding movement.