The early morning mist clears slowly. Well okay it’s not that early, but the Archers have not started yet, so for a Sunday, that’s early in my book. It is October and the leaves on the trees are turning autumnal browns, oranges and yellows but the sky is deepest August blue. There is hardly any wind and it’s quite warm so I didn’t really need to wear a Kagoul. I briefly think about taking it off but Lilly urges me on up the hill and I throw her new toy for her. She races after it eyes focused in concentration, tongue to the side,  a study in the sheer joy of living for the moment. She catches the ball and then proceeds to try and cover it in grass. She does this and it keeps her busy. This is good as I can get the binoculars out and do a spot of bird watching. There are a flock of Goldfinches playing follow my leader from tree to tree by the canal, or overflow channel that runs by the side of the old reservoir. A robin watches from a tree and the blue and great tits are already flocking together in anticipation of winter months to come. 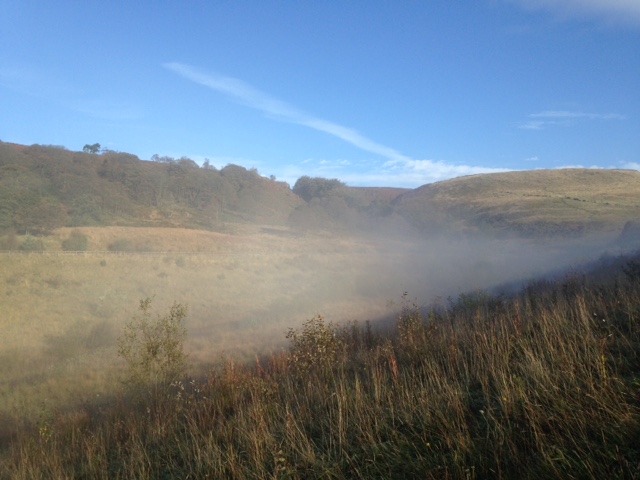 Later a buzzard flies over the old reservoir and disappears over the woods. A few minutes later I see it and a mate soaring low over the trees before it seeks and finds a thermal and rising slowly and effortlessly starts to gain height. The effort it uses is minimal, an exercise in physics and aerodynamics. No wing flaps just the odd adjustment to the angle of her wings and up she goes higher and higher into the deep summer blue sky. I stand and watch, aware that there is a ball being nudged toward me and an impatient collie giving me the eye. I glance down and Lilly stiffens everything focused on the ball, when I look back to the sky the buzzard has gone, disappeared over towards the Goyt. I stoop and pick the ball up and lob it into the valley that was once the reservoir. Lilly races downhill, her tail wind milling frantically to retain her balance. She finds the ball and races back up the slope.

Someone has had a fire in a clearing in the woods. They have been careful and built a stone barrier to keep the fire in and obviously made sure that it has been damped down afterwards. I wish they had taken their bottles with them though, or at least left them in the centre of the old fire. We should have a policy of whatever you take in you take out. It would be hard to enforce and education would be better.

As I walk back down the path the security guard who is guarding the Nestle drilling operation nods, and looking up at the sky, comments on the day. I stop and asked him how long he is likely to be on site.

“No sorry I meant how long until the site is finished?”

“Oh sorry mate, reckon about three weeks.” He crushes his cigarette out against the side of the cabin.

I contemplate asking him if he has seen the buzzards, but decide against this and wishing him a good day wander off down the path.

Another three weeks. Nestle are drilling a second borehole at the site. They already have one and it supplies them with water which they bottle under a health brand of some sort. The site is well maintained and full of notices about health and safety and prohibitions about where you can walk and bring a vehicle. I can’t help thinking though that they should have put up an information board explaining to people what they were doing. It would make a difference, and show that they care about the environment (which they do) and the people that use it. A very small cost, but a lot of benefit from a PR point of view. I must remember that when we implement the woodland grant.