Instead of a bike ride I decided to go to the Goyt. It was cooling off a bit when I eventually got there and up on the top of the hill there was a cooling breeze. I had brought my camera as the previous couple of times I had left it at home only to be confronted by Curlews almost posing to be photographed and a close encounter with a Coal Tit (no sniggering at the back, you know who you are!) Of course Sods Law meant that nothing would come within a mile of me, but I took it anyway. I’m glad I did.

The scenery was still there doing its stuff, and as I strolled down the track to “the bench at the top of the reservoir”, a couple of kestrels floated along on the thermals whilst the curlews kept up a liquid cry worrying about the presence of the two birds of prey. 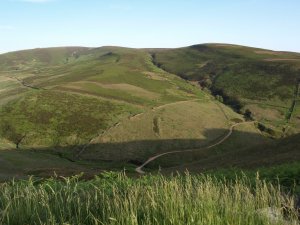 At the bench, I sat down and watched a solitary Great Crested Grebe do a bit of fishing, and a Heron flap nonchalantly down to the waters edge. 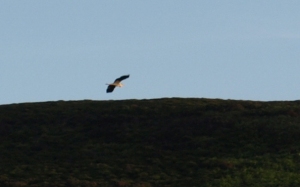 And then a real surprise and magic moment. A couple of red deer that had probably been keeping cool in some thick wooded undergrowth broke cover and ambled across some open land before disappearing into the trees. 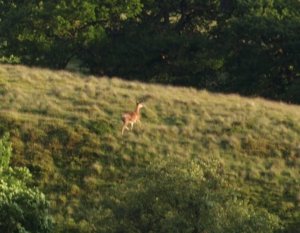 I thought about following them but realised by the time I had walked around the headland (about a mile) they would have been long gone. Actually what really clinched it was the emergence of about twenty school kids singing and making alot of noise accompanied by a “responsible” adult armed with a loud and crackling walkie talkie. I explained about the deer, and he excitedly shouted out to the children at the front that there were deer about and that they should keep very quiet. The decibels went up a few notches as they all began to shout and demand to be allowed to use the walkie talkie to tell their mates (yes there were more of them) a few hundred yards behind. I beat a hasty retreat up the hill, as I suspect did the deer.

Still it had made my day, and I forgot to mention the Ravens.

7 thoughts on “An Average Evening”